An Interview with the Civic Education Research Team | Introducing 89 Initiative 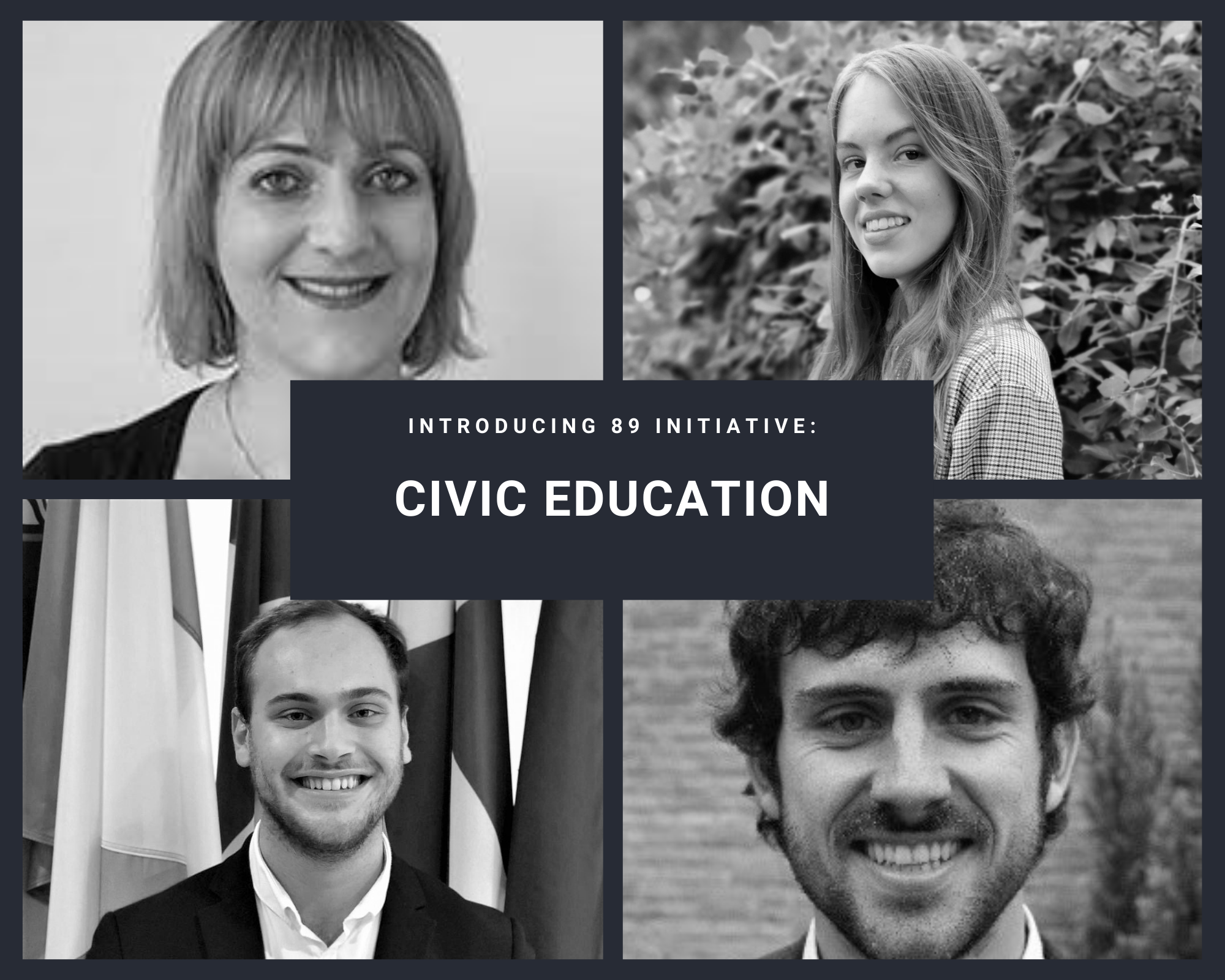 In a recent presentation, your team characterized its research as an attempt to understand recent instances of populism through a lens that is relatively unexplored—a lack of sufficient civic or citizenship education across Europe. What brought the issue of civic education to your attention, and what inspired you to choose to pursue more extensive research on it?

(MCP): Educational factors are often being cited as necessary to understand the appeal of populism, anti-establishment sentiments, or attitudes towards the EU; however, very little theoretical and empirical research has been conducted to understand “what kind” of civic education can help individuals to gain greater trust towards democratic institutions. In short, we talk a lot about the vital role of education, but, in practice, it is still unclear how to unpack its contribution against populist challenges. With our project, we aim to fill this “black box” and provide crucial empirical research to understand better how your people, and citizens more in general, can access and engage with political processes in our society.

(MA): In the winter of 2018, I realised that the following year would be the first year I would be eligible to vote in a major election – the European Elections – but while I had taken a Civic Education course in high school, I noticed I had learned quite little about the European Parliament. After realising I was not the only one in my cohort not having heard much about this election, I started an Instagram account and through daily posts and stories aimed at informing other people my age about the election and providing them with some basic political knowledge about the European Parliament. I would say that it was probably this knowledge gap and the feeling of having left school without really knowing how I could be an active citizen that motivated me to learn more about Civic Education and how it could be taught in a way that not only provides students with knowledge but with the ability to actively participate in society.

Do you have a unique personal experience with civic education that has informed your desire to investigate it further? If so, what did you learn from that experience? Have your personal perceptions of civic education policy changed since then, and if so, how?

(MCP): Prior to my academic career, I was a secondary school teacher, and civic education was among the subjects I taught. It was during this period that I realized the importance of civic education as a key instrument to help students to act as responsible citizens, be able to participate in democratic processes and be full members of their societies. This experience helped me to reflect on the several challenges which still remain in civic education curricula, including a gap between legislation and implementation, teachers’ training, and the importance of creating a teaching and learning context in which students are not just passive learners. Rather, students should be encouraged to act as “partners” in the delivery of civic education contents, such as digital literacy, health literacy, or knowledge of democratic institutions. In comparison with the past, civic education should now move beyond its traditional historical-nation-state component and be instead more fine-tuned with our current challenges. Here, students’ active participation in school life and their involvement in the wider local communities should be promoted as fundamental learning experiences linked to the civic education curriculum.

(TZ): I had the chance to touch first-hand civic education while carrying out an internship at the Representation of the European Commission in Milan. There, I was involved in the organisation of several citizenship education initiatives, such as the “Citizens’ Dialogues”. The Dialogues are opportunities for EU citizens to directly ask questions to Commissioners and are aimed at bolstering participation in the EU policy-making process at different levels.

Taking part in such initiatives was key in increasing my curiosity to investigate civic education from different perspectives. As a matter of fact, they led me to understand that there is so much the civil society doesn’t know about the EU (both what it is and what it does) and I feel that I want to help fill in these gaps in order for European citizens to be more informed, responsible, and participative.

(MA) I had the privilege to partake in several simulation games during my final years of school, some of them in the classroom others in the parliament. I was really fascinated by the methodology of these games and how without knowing I would often learn more than in the other conventional classes. After leaving school, I had the opportunity to do an internship with a start-up specialised on political simulation games where I learnt a lot more about the variety if these games and the possibility of making them more accessible to everyone by creating special digital versions. This led me to be really interested in non-formal civic education and generally motivated me to do more research.

One of the factors that differentiates the 89 Initiative’s research teams from traditional think tanks is its effort to bridge the gap between academic research and practical policy recommendations. Has this approach helped your team make novel discoveries and conclusions that other researchers might have overlooked, or has it made the research more enjoyable in any particular way?

(TZ): I believe that the 89 Initiatives’ approach of conducting research also by undertaking innovative ways has definitely helped us in our work. In the context of our research programme, we have decided to launch a podcast series and we have also dedicated half of our policy report to stakeholder engagement which has enabled us to interact with several civil society organisations and researchers across Europe. Not only has this made the research more enjoyable, but it has also helped us to expand our network and to get to know many civic education initiatives that exist in the continent

(MA): Academia should always also serve the people and work on providing solutions for problems society is facing. The approach of connecting the research to concrete policy recommendations is a way of making the research more accessible to a broader range of people outside of academia and starting a societal discussion. The determination to provide policy recommendations has motivated our team to engage more with the stakeholders’ perspective that is otherwise rarely mentioned in the academic literature but a crucial part of understanding the implementation of civic education.

What is the most pressing question about civic education that your research hasn’t yet answered and that you hope to answer going forward? Do you have any preliminary guesses as to the answer?

(MCP): Several studies and reports mention the 4Cs – communication, collaboration, critical thinking, and creative thinking as critical elements in equipping students with the right skills to face the challenges of the 21st century.  While maintaining that these four skills are indeed essential and well-researched by the literature, we also think that the C of Citizens should be added and further investigated.  Understanding what kind of civic education we should implement in schools is of paramount importance to reflect on young people’s concerns and attitudes towards democracy and political institutions. In this respect, we aim to systematically collect empirical information about what students expect from civic education, thus identifying the most pressing issues that need to be addressed, either in terms of pedagogical content and in relation with the delivery of the curriculum. We hope that our findings can be an opportunity to support a healthier civic education environment in schools and society more in general.

(TZ): I think that the most pressing question about civic education that our research hasn’t answered yet and that it hopes to answer is whether there is a gap between what the literature suggests and the policy practice. My personal guess is that academia and policymakers tend to agree that citizens participation—youth participation especially—has increased over the years, and this is a phenomenon set to last. However, we can still experience a gap in the implementation of civic education initiatives at the national and EU levels which at times prevents European citizens to participate in social, economic and/or political debates.

(MA): As there is a lack of literature on civic education in Europe and its political implications, there is lots of room for us to explore different topics. Our research so far has been mainly focused in tracking the enormous variety of civic education curricula and their implementation. 2020 has underlined the emerging spread of fake news and conspiracy theories. Thus, I believe that it is crucial to focus on one of the four competences mentioned in the Eurydice report Critical Thinking and gain more in-depth knowledge of how it is being taught, why it is the least mentioned in the curricula and how teaching this competence can prevent the susceptibility to fall for fake news and conspiracy theories.

(PLS): Scholars and analysts have tried to account for the rise of populism from multiple angles, from socioeconomic to educational causes, but the literature on the specific role of civic education on the populist phenomenon is scarce. At the same time, civic education and its contributions to solid and vibrant democracies have traditionally been studied in the framework of formal education institutions (i.e. secondary and higher education). Against this backdrop, our research team embarks in an unexplored research avenue by looking at the multitude of civil society organisations across Europe that advocate for and implement themselves civic education curriculae within and outside the classroom. We seek to bridge the gap between the existing academic knowledge and the practices of the organisations that promote civic education as a means to tackle the problems of decreasing political participation and increasing populism. We are confident that this research will shed light on the under-researched link between civic education and populism and help us propose useful policy recommendations both for policymakers and policy-implementers.