Red Lightning Bolt and Memes, a Sign of Hope for Women in Poland 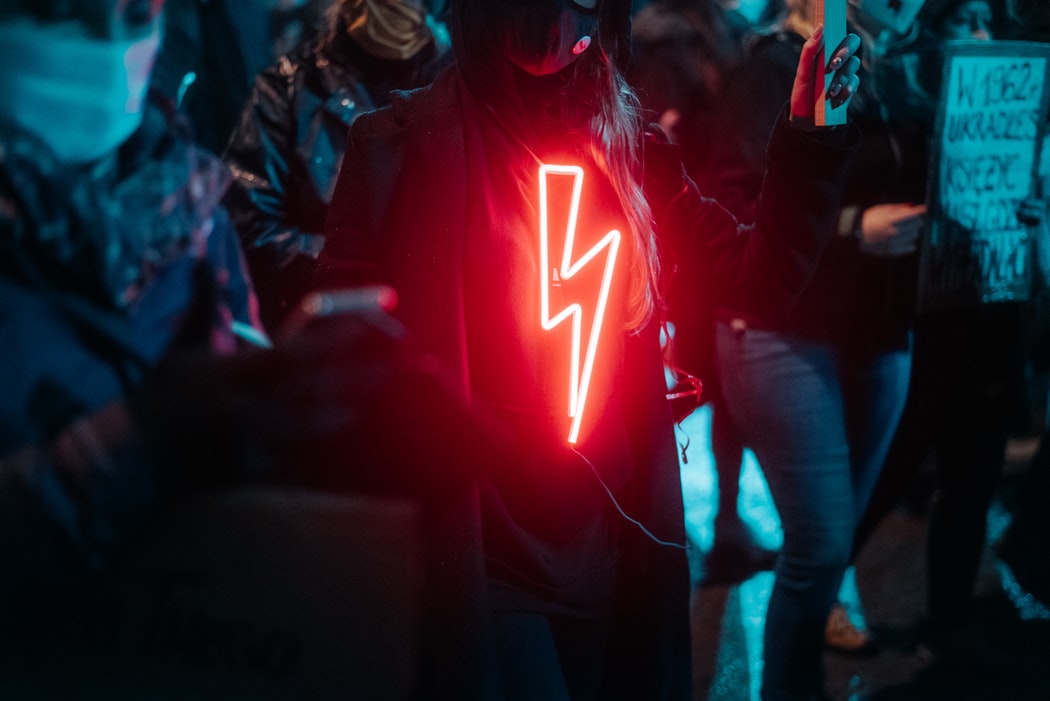 By Zuza Gałczyńska on Unsplash.

The 22nd of October marked the start of a new wave of women’s strikes which swept across all of Poland in reaction to a ruling of the Constitutional Tribunal threatening to tighten the already restrictive abortion laws in Poland. The ruling would make nearly all cases of abortion illegal, including cases of severe and permanent foetal disability, or an incurable and life-threatening disease. The change comes in spite of opinion polls over the past years indicating that the majority of Poles are against the tightening of the law. To put it into perspective, 98% of legal abortions last year had been carried out on grounds of severe foetal defect.

To the sound of an altered version of Eric Prydz’s “Call on Me” and Darth Vader’s theme among others, women and men who support the cause, or are generally dissatisfied with the state of democracy in Poland, flooded the streets of the capital and beyond. The strikes saw their highlight on the 30th of October where anywhere between 150,000 to 250,000 protesters gathered in different marches across Warsaw and merged into one large demonstration in the center of the city, headed towards the residence of Jaroslaw Kaczynski. It was the largest protest since the memorable 1980s and Wałęsa’s ‘Solidarność,” and, hence, it could be interpreted not only as the crisis of women’s rights but also as the crisis of the system and the politicians on top of that system.

One of the defining features of the marches, which its participants often call ‘walks in the city’ to reflect their peaceful attitude, has been the red lightning bolt, which now can be found in many uncanny places all across Poland but also in places abroad where Polish communities are present and strong. Another feature is the omnipresence of memes and internet culture, which could be seen on the protests themselves in the form of transparents and plays a large part in the logistics of organizing the marches. Instagram posts, prominent Polish satire pages and Facebook groups were used as the main resources to organize and plan when and where the protesters would be meeting for strolls around the city, as COVID-19 regulations prohibit public gatherings of such size. Such organisation, however, also reflects a lack of centralisation within the movement and is possibly a bad sign for its future.

Many individuals supporting the protests would regularly share updates on the location and actions of police surrounding the protesters as well as of known far-right sympathisers who,on numerous occasions, were trying to instigate violence. More importantly than that, supporters of the protests saw it necessary to share phone numbers with lawyers and other non-profit organisations which could help in case of unlawful arrest, and many protesters could be seen with phone numbers written in dark markers on their arms.

Because of the troubles with the police and general society’s and protesters’ attitude towards the ruling party, the marches have been slowly transforming into protests against the politicians and the overall situation in Poland. Two of main political slogans adapted by protesters “PiS off!” and “Fuck PiS!” could not only be heard chanted in unity by the protesters but also seen in variations on humorous transparents held by many of the marching crowd. Some of our personal favourites were “This is not the world Tony Stark gave his life for”, “If you want to decide about other people’s lives buy a copy of SIMS!” or “Ordo Luris thinks Crossfit means lying down spread eagle”. One last highlight with stronger language would be “The government is fucking us over so hard, they should have their own category on Pornhub”.

The still actively ongoing women’s strike is a continuation of the Black Protest, which commenced on the 22nd of September 2016 in response to debates on a bill that would introduce a complete ban on abortion, marking a drastic change in the attitude of protesters as can be seen in the language and slogans used this time around. Many protesters justified the vulgarity by saying that the blatant disregard of etiquette by many members of the ruling party warrants to be answered in the same manner.

Over the past two months the strikes have turned into a protests of a larger issue than just the ban on abortion—these are protests for democracy and for basic human rights which the ruling party are violating more overtly than before. Nationwide protests of this scale have not taken place since the Solidarity movement in the 1980s, which was one of the main contributing factors leading up to the collapse of the then-Communist government. Perhaps this time around the results will be just as groundbreaking but it will depend on the further actions of the protesters and their organisation which can be made difficult because of ongoing pandemic as well as lack of centralisation and further reaching plan. In 1980s there was one person, Lech Wałęsa, who was the face of the protesters, but this time around we still haven’t seen anyone like that. However, we can hope that the sheer magnitude of anger will successfully bring democracy, as we want to know it, back.