Thoughts on the Ukraine War: Week 13

Food security and the global south

On the eve of Putin’s invasion of Ukraine, the global food system was already vulnerable. An overreliance on four key global crops and the concentration of these in geographically localised ‘breadbaskets’ has been a source of concern for policy makers. Add to that the creeping pressures of climate change, and this concern turns to real angst.

The four key crops are wheat, rice, corn, and soy. While rice, corn, and soy are produced largely in China, India, the US, and Brazil, over 30% of global wheat exports come from Russia and Ukraine. Ukraine is also a leading exporter of barley, sunflower oil, and rapeseed oil, while much of the world’s agricultural fertilising products are exported from the region.

The war in Ukraine, and western sanctions, have all but crippled Russia’s capacity for agricultural exports. Food prices, affected negatively by COVID-19 related ‘supply chain issues’, have risen dangerously, as governments turn to other more expensive wheat exports.

The Russian naval blockade of southern Ukraine makes matters worse for European and Near Eastern importers, while India’s announcement of a unilateral brake on all grain exports will impact Asian markets. According to the UN Food Programme, wheat reserves are now perilously low. Should nothing be done, the world will run out of wheat in just ten weeks. 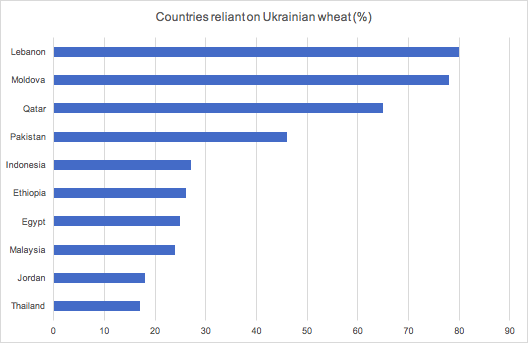 Of course, this global food crisis helps the Kremlin. By crippling supplies of wheat, Putin hopes to gain an advantage. Countries reliant on Ukrainian exports are almost exclusively in the developing world. In those where food prices have risen dramatically, governments may be forced into a trade accommodation with Putin. Where these are additionally vulnerable, or where prominent pro-Kremlin minorities have long existed, there is a risk of violence. Watchful eyes will regard Lebanon and Moldova with particular concern.

Since the start of the war, western governments have been so trained on the crisis in energy, that the food crisis has caught them almost by surprise.

But it is this second crisis which will have far greater consequences if not addressed. Vulnerable supply chains, made worse by the war and the progress of climate change, raise the prospect of famine, civil unrest, and geopolitical turmoil the world is ill-prepared to face.

A global coalition of rich states must quickly agree a set of aid packages to mitigate the food crisis in developing countries. This should immediately involve the building of more and better storage facilities, and subsidies to tame spiralling food prices. Going forward, it should provide knowledge and expertise to agricultural producers around the world on how to diversify from the four staple crops at a time of increasing risk.

In recent years, European governments have rolled back aid to the global south to help tackle more pressing priorities at home. In light of recent developments, this appears a great error. Putin’s war in Ukraine, and an escalating global food security crisis, must now force a rethink of this course.